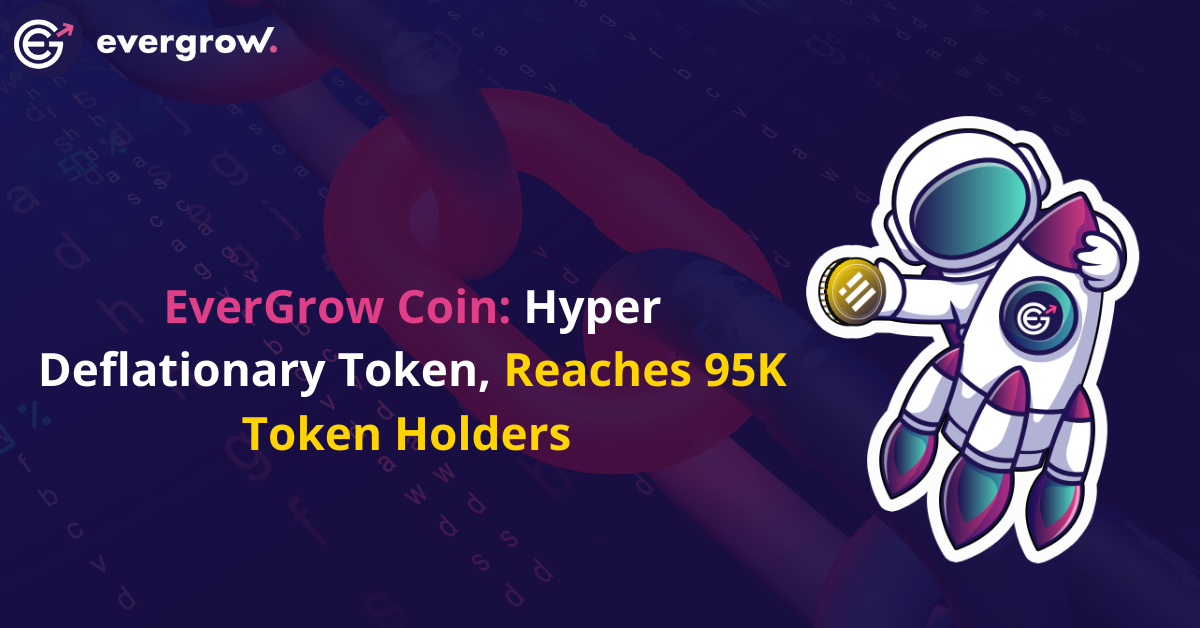 NEWARK, DE / ACCESSWIRE / November 10, 2021 / EverGrow Coin has paid more than $22 million in rewards to its holders and recently passed the Milestone of 95K Token Holders in Just One Month. Cited by many analysts and experts as Next Shiba inu, One of the most popular features of the EverGrow Smart contract is that it pays rewards in BUSD to all its holders. This means that regardless of any fluctuations in the value of their Crypto holdings, EverGrow Coin investors are receiving a regular, viable passive income. On launch, EverGrow Coin has burned more than 50% of its token supply and removed those tokens permanently from circulating supply. The continuous decreasing supply ensures that EverGrow holders get almost double in rewards compared to its nearest competitiors. Crypto investors often see projects running sideways for months or even years with little effort to do more than shilling the price and exchange listings.. EverGrow Coin has been introduced in a very different way, and millions of investors around the world are paying attention.

EverGrow Coin distributes the highest rewards compared to other reward tokens. 8% of the total volume generated by all Buy/sell transactions by its Holders is used to fund rewards in BUSD, which is a stable coin pegged 1:1 to USD, and that is why its Holders are not required to sell their holdings to book their profits.

Buy Back and Anti-whale Mechanism:

The developers of Evergrow Coin have made a clever contract so that no one can sell more than 0.125% of the total supply in a single transaction, thus avoiding huge drop in prices and Panic Sells. 1% from every transaction is sent to Buy Back wallet. When the buyback wallet is activated, it buys EverGrow Coin from the exchanges and removes the purchased tokens permanently from the circulating supply by sending them to the burn address.

The EverGrow project is not just about rewards. Since its launch, the team following EverGrow Coin has discussed the importance of having a genuine long-term value-added service and launching a few platforms in the coming weeks. The Evergrow Coin team is very flexible, as it does not dwell on its achievements and always tries to add something new to its repository.

The latest addition in Ecosystem platforms will be the new Content Subscription Platform, Crator. The revenue generated from the platform will be used to Buy and Burn EverGrow Coin. What this means in simple terms is that when Crator generates revenue, rather than lining the pockets of the team behind EverGrow Coin, that revenue will be used to buy EverGrow Coins. This in itself will create upwards price action and more rewards for those in rewards eligible wallets, further increasing the attractiveness of that option. This in turn encourages centralized exchange investors to pay their taxes, generate more rewards and move to that option.

Finally, the tokens bought with the Crator revenue are Burned, which means they are removed permanently from circulation. This means even less tokens receiving rewards, so yet more rewards for holders. As we unravel each layer of this arrangement it becomes more and more clear why the EverGrow team chose this approach.

It’s no wonder the implications of this move weren’t immediately understood by many EverGrow investors, but it is becoming increasingly evident why many are now citing EverGrow as becoming a top 20 global crypto or next Shiba Inu. There are almost no examples in the cryptoverse of this level of critical thinking, and it is clear we are seeing a project in EverGrow that is truly raising the bar.

Evergrow will also be launching its NFT marketplace based on the Binance smart chain and the world’s first NFT lending platform. The platform will allows NFT owners to borrow loans by keeping their NFT as security at a reasonable interest rate. This will enable them to meet their fund needs without selling their NFT. In addition, investors may buy and sell NFTs, including those acquired with a fixed bond on the NFT loan platform in the BSC-based NFT market.

This is the team’s first project, and they are quick to adapt. There is a clearly defined road, white paper, and they are very open about plans to expand the group and how they will market EverGrow. The dev team has worked without crypto for decades as business owners, project managers, MMA trainers, and leaders in their communities.

All stories by:Tori
Login to LA News Wire
Reset Password
Enter the username or e-mail you used in your profile. A password reset link will be sent to you by email.