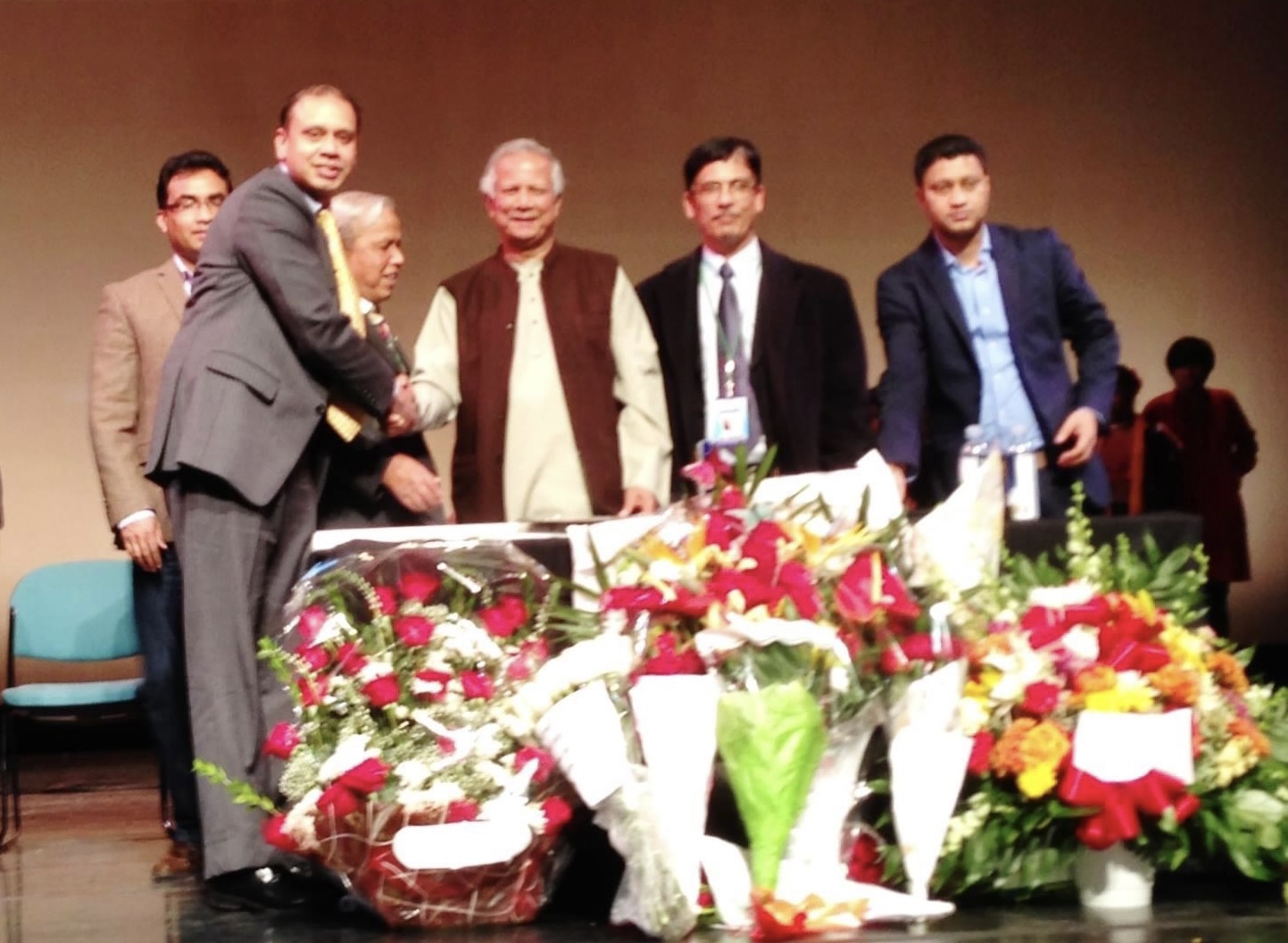 Zahid F. Sarder Saddi has been involved in the Bangladeshi-American Community for over 25 years. He is an influential civil society leader who advocates for COVID-19 vaccine donations toward Bangladesh.

This event took place in The Forum at Columbia University in New York City. Humanitarian awards were presented to a number of Bangladeshi community leaders and activists. Zahid F. Sarder Saddi, an influential civil society leader, received a humanitarian award along with eleven others. Awards were presented by Nobel Laureate Dr. Muhammad Yunus, who is one of only seven individuals to have received the Nobel Peace Prize, the United States Presidential Medal of Freedom, and the United States Congressional Gold Medal. Dr. Yunus is also known for his work founding the Grameen Bank in Bangladesh, and developing the concepts of microcredit and microfinance.

While presenting awards, Dr. Yunus expressed his pride at Bangladeshi Americans working to solve humanitarian issues during a time when people need it most.

The ceremony was held on Saturday, March 26, 2022, which was the 51st anniversary of the Independence Day of Bangladesh. On March 26, 1971, Bangladesh declared independence from Pakistan, which was a hard-won victory after a nine-month war that Bangladesh fought against the Pakistan Army.

At the event, recipients took the stage to discuss the essential nature of vaccine distribution to Bangladeshi citizens and expatriates. Much of this distribution was possible with the assistance of COVAX, or COVID-19 Vaccines Global Access- a global initiative involving GAVI, The Coalition for Epidemic Preparedness Innovations (CEPI), the World Health Organization (WHO), and UNICEF.

The United States’ assistance in the vaccine initiative was invaluable. Zahid F. Sarder Saddi addressed the press, acknowledging the importance of the United States’ efforts to lead the global response to COVID-19 by providing vaccines and other forms of assistance.

In particular, the United States’ participation in distributing vaccines to Bangladesh was an important representation of the strategic allyship between the two countries, and was representative of their cooperation and partnership. The United States donated more vaccines to Bangladesh than any other country in the world, a significant gesture that benefited Bangladeshi citizens and provided a significant push for a return to normal life.

In addition to providing cultural connection amongst Bangladeshi people living in the United States, the Society also provides mutual assistance when it’s needed. The Bangladesh Society responded to the COVID-19 outbreak by holding numerous vaccine clinics, ensuring access for many people who may have otherwise faced difficulty in receiving vaccines. They also worked to facilitate shipment of vaccines all the way to Bangladesh, some 7,800 miles away from New York City.

Members of the Bangladesh Society, like lifetime member Zahid F. Sarder Saddi, continue their work to ensure the health and safety of Bangladeshis living in the United States.

www.ZahidFSarderSaddi.com or reach out to [email protected].